A Couple of New Ones 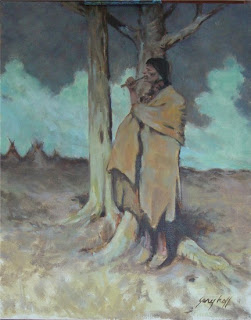 I've been remiss in posting lately--lots of newer stuff going on, including studies for the commission mentioned below, some silverpoint work, and a couple of ideas for a new series of still life. But I'm also working on a new direction as shown in the "nocturne" at the right. This is oil on linen, 20x16. It's a copy of an original by Frederick Remington, the famous Western artist. Remington did quite a number of night scenes around a century ago, give or take a couple of years. Those were the subject of a travelling retrospective a couple of years ago, "The Color of Night." Being a fan of Remington's work, I decided to give this one, "The Love Call," a whirl. Remington's palette was very muted, and his brushwork exceptionally expressive. I think I did his work justice, if only just. 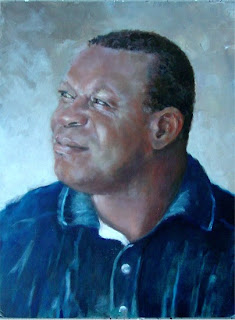 I've also been finishing up some life portraits, including this one of my friend Duane. It's 16x12, oil on panel, one of a series I've been doing of friends and coworkers at Des Moines University. I'm thinking of putting all of these together into a show. Perhaps.

The Studio Journal by Email